I have been so delinquent in posting about the various projects we have had going on over the past few months, and I'm sooooo sorry about that!  My two oldest (ages 9 and 6) just returned to school last week, and I'm finding that I have a little more "me" time (well while my youngest son naps).  So, I hope to catch you all up on what has been happening around here.

First things first, our deck/backyard project.  If you all remember, we put in an above-ground pool this past Spring.  With that, came major landscaping work, as well as tearing up our old deck, replacing that, and adding on so that it would connect to the pool.  My ever-so-handy father, father-in-law and hubby worked hard one HOT July Sunday to cut and mount all the pressure-treated posts to the outside of the deck.  Then they added the rails and top rails.  The first of August, my hubby and father-in-law, put up all the balusters.  We decided upon aluminum balusters.  We actually ordered them from decksdirect.com, and they arrived in a matter of days.  They went up relatively quickly, and where they are aluminum, we don't have to worry about them rusting or having to stain them.  Several people have actually commented that the balusters actually look like wrought-iron....which I love. 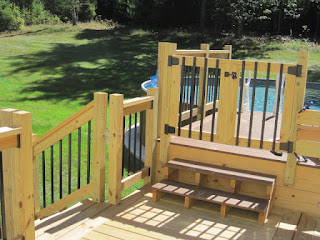 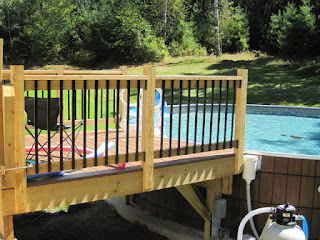 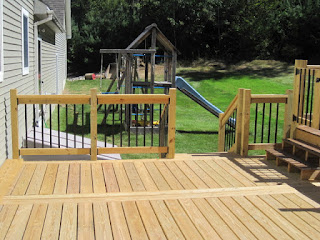 Of course, once the deck was done (well our part anyway, as we are still awaiting our contractor to come to build the screened-in section of the deck) there's was all kinds of landscaping to be done.  We opted to do much of the work ourselves, as we really couldn't see spending thousands of dollars for a landscaper, when we were capable to do the work ourselves.  So, we ordered 12 yards of loam, and starting shoveling, raking, rolling, seeding, and watering.  We decided to break the backyard into sections as we prepared the three various areas to be seeded.  We did this as we only have one hose and just one outdoor water hook-up.  We didn't want to have to spend all day moving the sprinkler from one spot to another, so we opted to do one section at a time, allowing about 2 weeks to water each section.  The grass came in awesome on the two sections we have done, and we are waiting to seed the results of the third section, as that was just seeded on Monday.  It will look nice to have grass again! 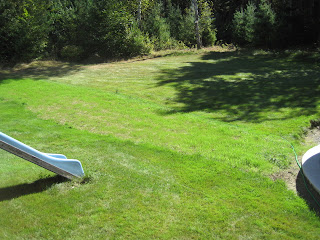 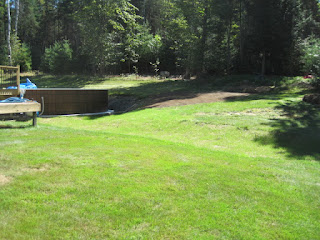 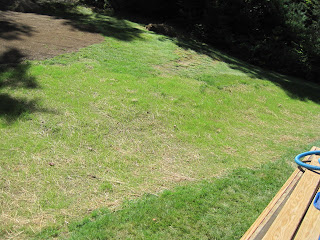 Here's the third section we just seeded the other day 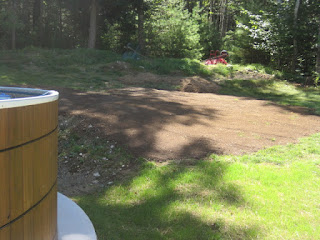 I also heard from our contractor and he hopes to come sometime next week to get started on our project.  We might not be able to enjoy the screened-in deck much this year, but come next Spring/Summer we will enjoy it so much.
Posted by All Things Beautiful at 1:00 PM