Well, for those of you who have been following my blog, I may have mentioned a time or two, how much I LOVE burlap.  Well, I had decided that burlap panels would look beautiful in my bedroom!  Check out these from Pottery Barn

To date, I have had white roman shades adorning the three windows in my bedroom.  After buying new bedding, I knew I wanted to dress the windows up a bit, but still wanted to keep the roman shades.  So, with that in mind, I decided I would layer my windows.

Knowing that drapery panels are way over-priced to purchase.  I called my mother-in-law, who is quite handy with a sewing machine, and asked if she would make me some drapery panels.  With a yes from her, I proceeded to order up many, many yards of burlap fabric in the color natural from Fabric.Com.  For $7/yard you can't go wrong.  I even ordered a little extra for a throw pillow for my bed, and enough to re-cover my lamp shades in burlap.

I absolutely detest spending a lot of money on drapery hardware.  So, I searched on-line and found some relatively inexpensive pewter rods with a ball finial, 3/4" in diameter.  Once I received those, I went to Lowes and bought several packages of these clip rings: 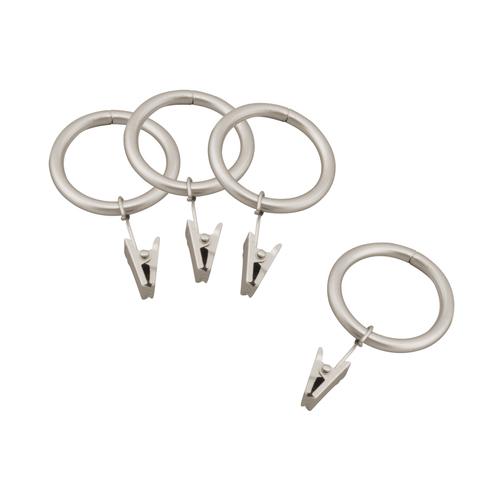 They were pewter and would accommodate a rod up to 3/4" in diameter and they came 7 to a pack for $5.97.  You can't beat that price, believe me I tried!!  My hubby then mounted the rods as close to the ceiling as they could go.  In case you haven't heard or read somewhere, by mounting the rods as close to the ceiling as possible, it actually makes your room seem taller, which inevitably makes it feel larger.  It also makes your windows look taller.  I ironed all the panels, added the clip rings and hung them.  Beautiful. 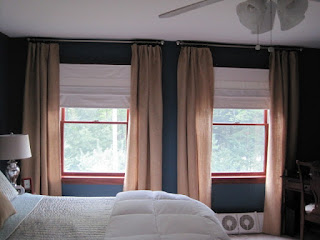 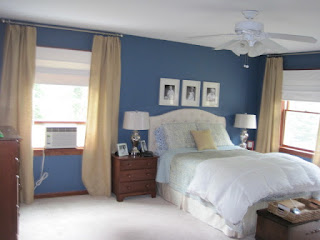 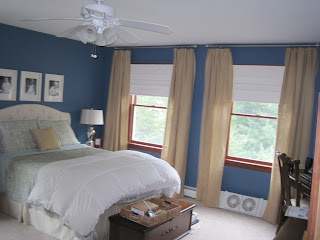 For those of you who may not have worked with burlap before, which for me this was my first time. Burlap does shed a lot of fibers.  It is not soft to the touch, and in fact is somewhat course and not as pliable as other fabrics.  I tried to hang my panels directly from the rod itself, so to save money by not getting clip rings, however the burlap would NOT stay put on the rod.  It would repeatedly slide on the rod, and end up covering much of my window.  I really wanted the panels to flank my window not cover it.  So, after trying to work with the panel on the rod for a bit, I gave up and bought the clip rings.  That was the fix I was looking for.  We intend to raise the roman shades up so they rest just below the curtain rod.  This will give the illusion that my windows are that tall, and you won't see all that wall space between the rod and the top of the actual window casing.  When we get around to doing that, I will be sure to post pictures.
Posted by All Things Beautiful at 2:06 PM