Who can't use additional shelving in their home?  Whether it is just for decorative purposes or for function and aesthetics, wall-mounted open shelving is a MUST!  Right now, it is extremely popular to use in place of kitchen cabinets.  Check out these: I'm in love with this look!  It just makes the space seem much more airy.  Perhaps I will consider this when renovating my kitchen (which won't be a for a couple of years), but for right now, I thought shelving like this in my dining room would be fabulous to display some of my blue and white pottery/glassware.  I happened to stumble across these adorable cafe shelves at Ballard Designs.

I started first with my search for the brackets.  I found some great, cheap wooden brackets with a similar scroll affect at HomeDepot.Com for $6.35/piece.  I ordered 4 of them, two for each shelf.

My hubby had some 2x12 boards laying around from past projects for the top of the shelf, so he just cut them to the dimensions I wanted (12 inches deep by 19 inches), well so I thought, more on that later.

We headed to Home Depot to pick out some trim for the front and sides of the shelves.  We ended up getting a trim that was already primed white, which was perfect as I knew I wanted to paint them black. 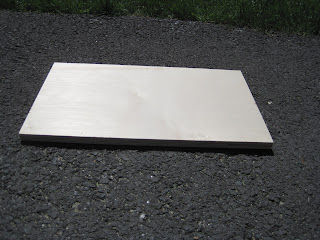 Here's the top of the shelf cut to size. 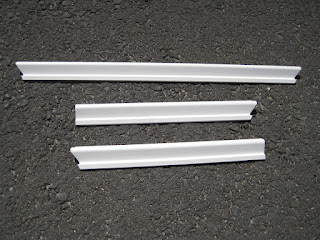 Here's the trim pieces...longer one for front of shelf and shorter ones for sides of shelf.

Here it is with the trim pieces attached to the shelf: 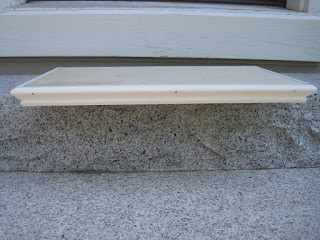 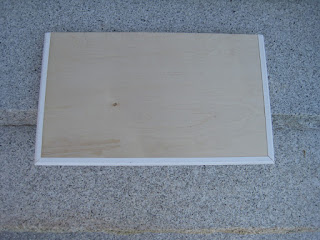 My hubby then attached the 2 brackets to the underneath of the shelf.  We knew we weren't going to
be able to align the brackets so they would sink into a stud when we hung them, so I just eyeballed where I wanted the brackets, and we used some mollys (wall anchors) in the wall, which the brackets would hang from, to support the weight of the shelves and whatever I decide to put on them!  I placed them one above the other in an alcove corner in my dining room.  However, once we got them up on the wall, I realized that the depth (12") was too obtrusive.  You see, 12" seemed fine, but then by the time my hubby added the moldings, they were 3/4" bigger on all sides but the back.  They stuck out off the wall too much...they really were in the way!  Soooo, I begged my hubby to cut off a few inches.  This sounds simple, right!  Wrong....by cutting off some of the depth on the shelf, it affected the brackets.  The brackets would end up being too deep for the shelf.  Thankfully, the brackets could be used either way, so he took the brackets off, then cut off about 3 inches from the back, and reattached the brackets vertically rather than horizontally. Thankfully, he was able to make these cuts without doing any damage to the trim pieces that were attached to the shelf.  Of course, he had to putty over all the areas that needed it, as some wood was damaged when he took the brackets off.  He then had to reapply multiple coats of Flat Black Spray Paint, and Flat Clear Coat Spray.

The shelves ended up being (with molding) about 21.5 inches long, and 10.5 inches deep!  It's the perfect depth and length for the space.  I think if I were to make more shelves like this, say for my kitchen, I would keep with a similar depth...unless they were being hung in the place of my upper cabinets.  Reason being....if you place a shelf of greater depth on a wall with nothing underneath it, it protrudes off the wall so much, it's actually dangerous.  Trust me, I learned the hard way :)

I haven't had a chance to put anything on them yet, but here is the finished product 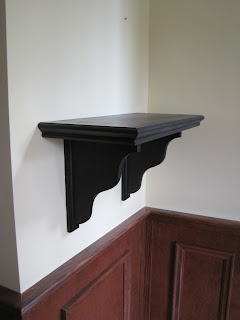 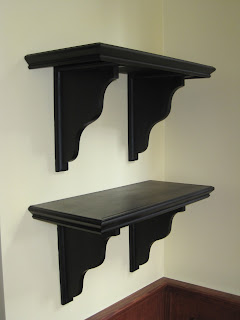 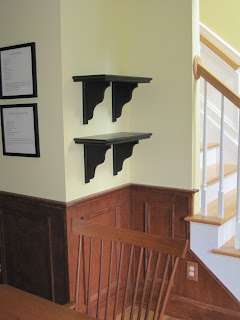