I've been trying to redecorate my daughter's room for awhile now.  With three kids, the youngest being 2, I am very busy.  But, after making that adorable bookcase out of wooden crates, my hubby offered to make some crates, slightly bigger than the ones I bought at A.C. Moore, and put casters on the bottom, so my daughter would have a few more places to put her "stuff"with the capability of them being mobile.

He decided to make the crates out of old pallets that we had gotten with our wood pellets.  He used his saw and cut the boards off the pallets and used those for the sides of the crates, and then he bought a 1x12 board at Home Depot for the ends.  He used his hole saw and jigsaw to make handle holes on the ends, as well. Because we wanted a rather rustic, vintage look, we simply nailed the pallet boards into the 1x12, leaving the nailheads exposed in a sense.

Before placing the casters on the bottom, which we purchased at Home Depot for cheap, I stained the crates and glazed them with the same products I applied on the crates for the bookcase (see my post on Crates, Crates, and more Crates).  Once this process was done, my  hubby placed four casters, one on each bottom corner of the crates, and they were complete.

Check out the finished product.... 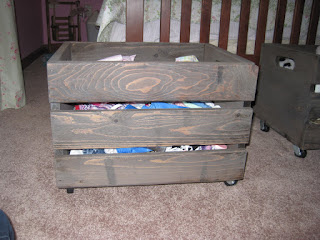 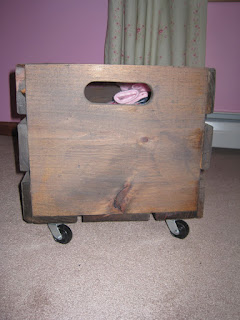 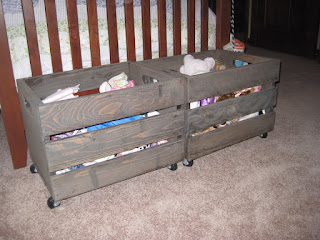 She has her stuffed animals in one crate and her dolls clothes, oh the doll clothes, in the other.  You could also stencil numbers or words on them to give them a real antique look and feel.  Super easy and super cheap!

Posted by All Things Beautiful at 6:25 PM