I can't believe it, but a year ago today I created my very own blog, and  posted for the first time EVER.  Five-thousand three-hundred page views later, I'm still blogging, and enjoying it very much!

OK, OK, on to the Antique Serving Table Makeover....The older I get the more I have developed a true love for antiques!  It wasn't but just a few years ago, that I wanted only "new" things.  But, since that time, I have acquired a few pieces of antique furniture that were passed down to me.  One was my grandmother's desk.  I acquired this piece as a child, actually, but never really appreciated the value of it, and I'm not talking about monetary value, until just recently.  My hubby had the desk refinished for me several years ago, and every time I walk past that desk, I think of my grandmother, who gave it to me, and has since passed away. 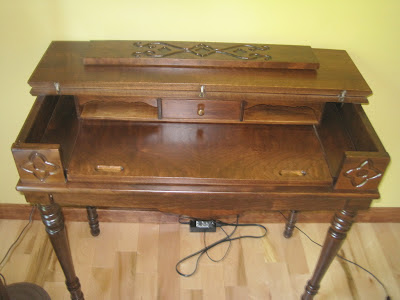 I also received an antique chair.  It was in really rough shape.  My mother actually had it stored in her attic, and gave it to me, again, a few years back.  The chair was actually my great-grandmothers.  With limited reupholstering skills, I decided to let the professionals re-upholster the chair, and now it sits in my formal living room. 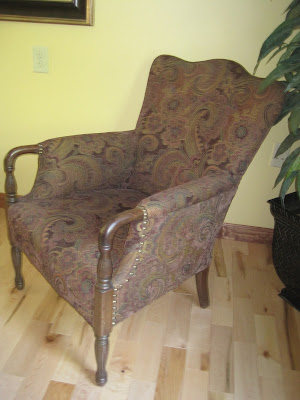 About two months ago, I received a telephone call from my youngest brother!  He and his family currently reside in my paternal grandparents old home.  When my grandparents passed away, their house became a home to a few different family members.  To make room for their belongings, my grandparents things were stored in the upstairs bedrooms and the eves.  Well, my brother is trying to clean things out, and he wanted to know if there was anything I wanted of my grandmothers.  With my new found love of old, sentimental things, I said I would be up to check things out, and that I did.  I snagged a beautiful, old, serving table, a plant stand, and an occasional table.  They all appeared to be antiques, and there was just something about each and every piece that I loved.  I loaded my vehicle up and began an immediate makeover on the serving table.  It had been stained dark brown, but the finish coat appeared to be in really bad shape. 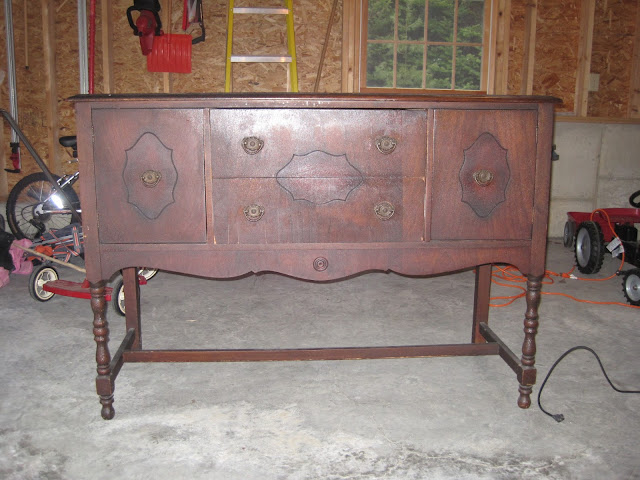 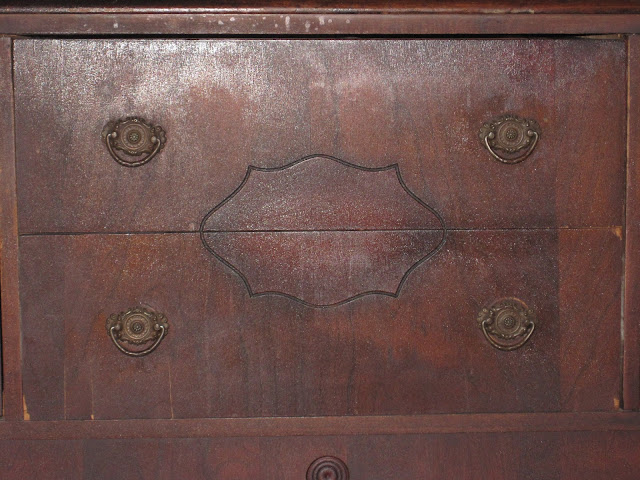 Where it had been stored in one of the upstairs bedrooms, where there's no heat during the winter months, and really hot in the summer months, I think this really affected the finish coat.  Otherwise, the table was in great shape, with few imperfections.  I decided that I wanted the serving table to sit in my formal living room, just beneath an over sized, framed painting.  Since I have accents of black throughout that room, I decided I would paint the serving table a beautiful black.

I began by taking the doors off and the drawers out, then removed all the hardware.  I stored the hardware in a special place as I planned to reuse the hardware. I then began sanding.  I primarily used my hubby's palm sander, and occasionally a block sander.  Here's what it looked like after I had sanded it all down. 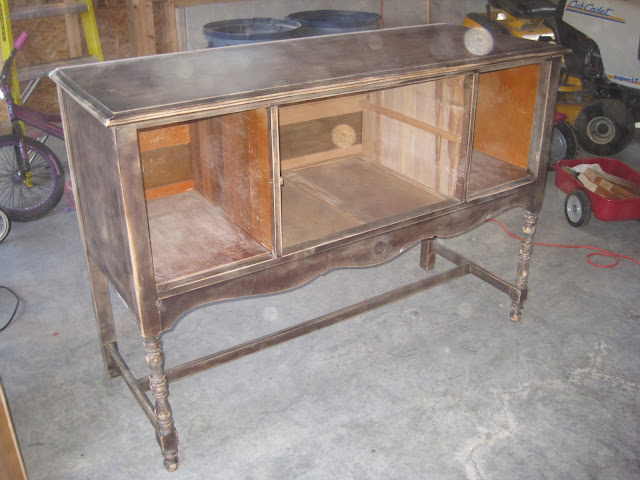 I then primed the entire piece using a small roller for the flat surfaces and a Purdy angled brush for the inside of the cabinets and the turned legs.  I happened to have white Kilz stain-blocking primer on hand, but I should have gotten grey primer, as that's preferred when you are painting a color as dark as Black.

I gave the table two coats of primer, and then headed to my local Benjamin Moore retailer and bought a quart of Advance black satin  paint, or so I thought.  When I got home, I opened the can of paint and started to stir it, I noticed that the paint looked dark gray not black.  In fact, the paint residue on the lid of the can even looked gray.  Trying to remain optimistic, I began to apply the paint to the table,  but it appeared dark gray in color.  I thought that perhaps it looked gray because it was going over white primer, so I applied one full coat to the table. 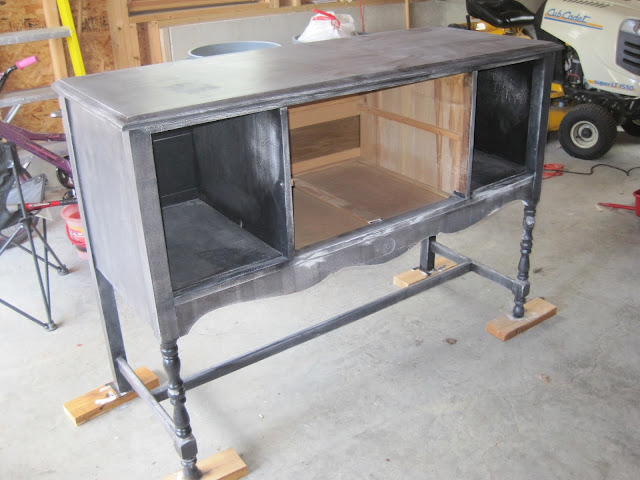 Then re-applied a second coat a day or so later.  IT WAS STILL GRAY in color!  I decided to bring my little quart of paint back to my local retailer and see what they could do for me.  They willingly gave me a credit for that can of paint and mixed me up a new color, called "BLACK".  Again, the paint in the can appeared gray, but the stir stick, once dried, appeared black, so I figured I would try it.  Again, I applied two full coats of the "Black", and after it dried, it still looked like a charcoal gray.  At this point, I was more than frustrated.  Even though I love Benjamin Moore Advance paint, I opted to go to Home Depot and buy a quart of black satin paint off the shelf.  It happened to be Valspar. When I opened the Valspar paint, it was without question, BLACK!  I was so excited.  I lightly sanded down the surface of the table, and then applied the black valspar paint.  It looked great....until I got to the top of the table.  For some reason, even though I was using the same roller, once the paint dried, you could see the overlaps of lines created by the roller.  I sanded the top down several times and tried to paint the top with the smaller roller, and even tried using a full-size roller, but both kept leaving lines.  At this point, I seriously could have thrown something, anything!

Before moving onto the finish coat application, I decided to paint the detailed scallops on the doors and drawers with Rub 'n-Buff in gold leaf.  If you've never heard of or used Rub 'n Buff, the product is amazing. 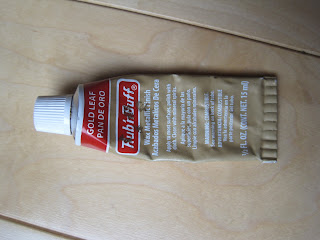 It's a wax metallic finish, that can be used on nearly any surface.  It comes in 1/2 fluid ounce tubes, and in a variety of metallic colors.  I love the gold leaf, and had it left over from another project I had done so I used that!  It's readily available at craft store:, AC Moore, Michaels, etc. and cost all of $4-5.  Despite the size of the tube it comes in, it can paint a lot of area. You simply rub the product on, and once dry you buff it, and it leaves a shiny, metallic finish!

I then bought a very small, thin, angled paint brush from AC Moore, so I could get the paint into the fine lines of the scallops. 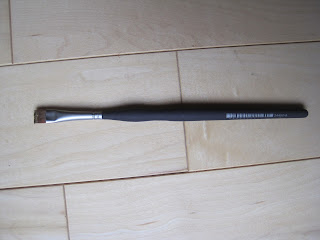 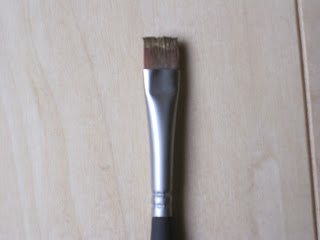 Here are the before photos of the serving table, notice the scalloped areas on the doors and drawers. 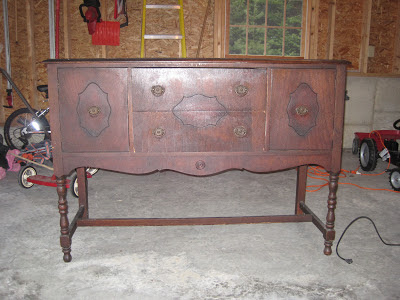 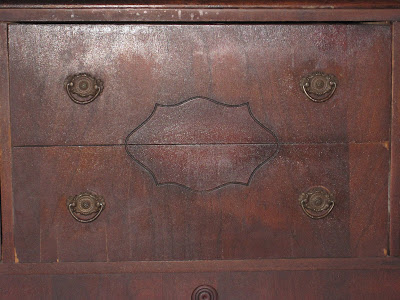 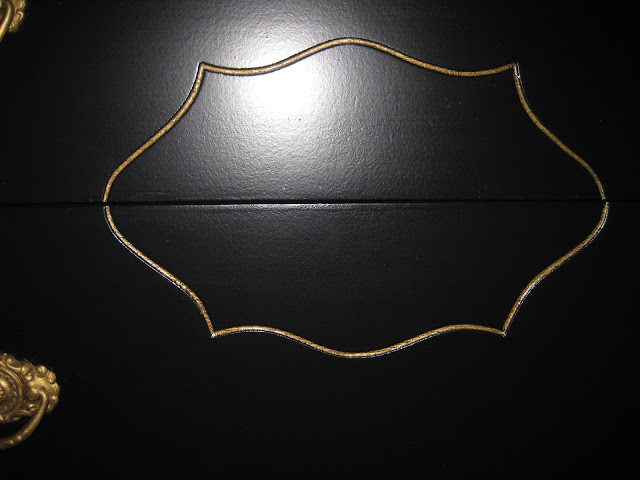 Finally, it was time to paint the finish coat.  We opted to use Minwax Polyacrylic, as it is water-based, and the Valspar paint I had used was water-based.  Now, I have to admit, I have never used Polyacrylic before.  It is very milky in appearance, and when it goes on, it looks milky, but as it dries, it dries clear.  Well, the first coat I put on, I put on WAY TOO thin!  It said to apply thin coats, but I put it on so thin, it didn't even cover in all areas.  I started to freak out once I saw what it looked like once it dried.  My hubby assured me that we just needed to sand it down and apply the poly a bit thicker, so to ensure even coverage.  I decided I would let him deal with the polyacrylic, so he put the top coat on with a nice Purdy nylon brush.  Once it dried, though, there were still a few spots that didn't get covered, so we sanded it down again, and re-applied another coat.  We did this four times, and by the fourth time, we started to get bubbles which dried in place and made the surface bumpy.  At this point, my husband was ready to send the table away, and I was feeling pretty discouraged.

Then, I had a thought, FORGET the polyacrylic, it was too temper-mental for our taste, let's use Satin Clear Finish Spray Paint by Krylon.  For $3.24/a can, as compared to the $17/ a quart for the polyacrylic, I figured we didn't stand much to lose.  I actually bought three cans of the Finish Spray Paint so to ensure we had enough.  Before using this, I prepped the table, by ONCE AGAIN, sanding down the entire table.   My hubby then applied several coats of the Clear Finish Spray Paint, and it left this white, hazy film all over the table top.  I'm guessing, that in order to use this product, you must use it directly over a  freshly painted surface.  Where we sanded the surface before applying it, we think this messed it up.  SOOO, my husband decided he would sand down the entire top of the table, right down to the paint, and then attempt the polyacrylic, once again, but with a new Purdy nylon brush.  He did, and after several more tries it came out fine.  It's not perfect, but I think if we expended anymore time on this little project we would have harmed this lovely piece of furniture.

The last and final step was to paint the hardware, as it was in really bad shape and was very dingy looking.  I used the Rub 'N Buff, in gold leaf, once again.  I applied it with a small paint brush, all over the door and drawer pulls.  Once dry, I buffed them all. 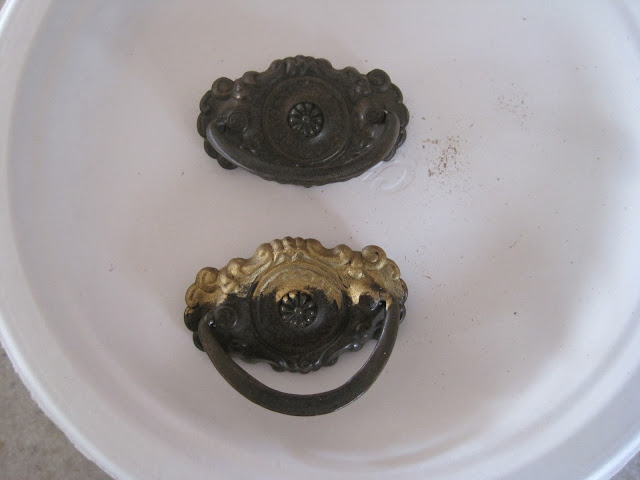 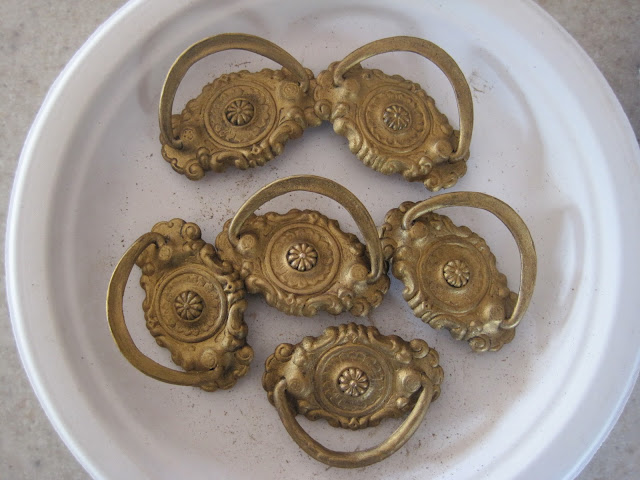 Then I painted the hinges and screw heads 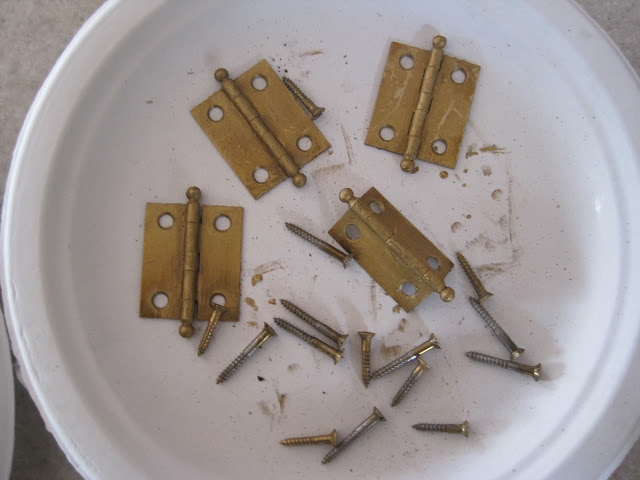 Finally, I screwed in the pulls on the drawers and doors, and the hinges onto the door, and then onto the table.  Here's the finished product 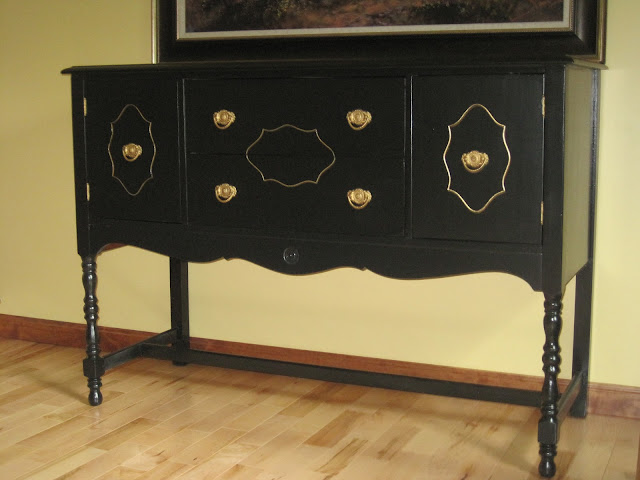 Posted by All Things Beautiful at 2:04 PM